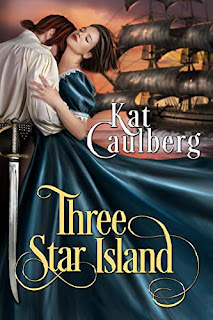 In Three Star Island Kat Caulberg takes us back to the 18th Century for a buccaneering time travel romance. We are introduced to Penny Saunders, a very 21st century woman, fascinated with history, who has found herself thrown back through the centuries to the colonial era Caribbean island of Three Star. By the time we meet her Penny has been put through the wringer, battered by her experiences being stranded in the past. A chance encounter with a half-dead stranger on the beach sets up the narrative of romantic tension between Penny and the castaway - renowned pirate William Payne. Given that they meet on the beach it unsurprising that a romance built on sand should face more than it's fair share of instability, challenges and threats.

So, cards on the table, I don't typically read romance novels. I tend more towards swords, scifi and literary fiction. That being said, I devoured Three Star Island over the space of about 15 hours - with a nights sleep in the middle. It is a thoroughly enjoyable read and put me in mind of Jane Austen, albeit with a little more swearing (that is to say, there is a little swearing!), a touch more sex and a few more swords.

The comparison with Austen is down to the tight focus on characterisation. Three Star Island doesn't have a cast of thousands. Instead it looks closely at the relationships between a few key individuals on the eponymous island. In particular, the rising and falling tension between Penny and William in the first half of the book is done especially well. There weren't really any points where I was jolted back to reality with a clumsy bit of dialogue or cumbersome sentence. It flowed nicely from chapter to chapter. The characters are fully fleshed out individuals. We come to understand their motivations, their beliefs, their virtues and their flaws. As such the plot follows naturally from the characters, rather than the other way around.

The second half of the book is where the action ramps up a notch. We're given broader glimpses to the 18th century world of Three Star Island and in doing so Kat Caulberg demonstrates that she's done her research and knows her stuff. The world is immersive in language, feel and description. It's not as densely technical as a Patrick O'Brian nautical adventure but it is sufficiently detailed to maintain a suspension of disbelief. I noted a recurrent playfulness around language and its use - the contrast between 18th century and 21st century English. This helped build opportnuties for 'fish-out-of-water' style humour but also added texture to the read beyond simple dialogue, description, action. There's depth.

One of the key themes of the book is that of redemption. In this sense William Payne take the role of the 'terrible man' in need of being saved through love with Penny as fearful saviour, balancing passion against horror and fear. I enjoyed the exploration of these ideas, love, fear, sacrifice and salvation. They aren't laid on thick, like too much jam smothering a sandwich, but instead add a little bite to the plot. Enough to genuinely raise the stakes and evoke compassion and empathy with our protagonist(s).

Finally, as a romance novel there are clearly romantic scenes. They permeate the book and if that's your bag, I would imagine you'll enjoy them. I'm not especially hot about the 'hotness', however, nothing felt forced or artificial. Rather an intimate portrait of a passionate new couple.

In conclusion, would I recommend Three Star Island? Absolutely. Particularly if romance or time travel romance is your thing, you'll definitely enjoy it. If they're not your thing, well, give it a go anyway. It's pacy, well written and cleverly put together - that makes a good book, right?