The Solar System is on the brink of war and three misfits are thrown together on the warship Aggressive.

A pilot, a terrorist and a special agent. As they journey from Earth out towards Saturn, each must face the brutal reality of survival in the cold depths of space.

The Aggressive is an adult sci-fi novel for those who like their stories dark, complex and deadly.

Global Amazon link (should take you to your local Amazon page)

Gem Jackson was born in 1984 and has terrible eyesight because of a childhood spent reading Verne, Herbert, Feist and Pratchett in eye-straining gloom when he should have been sleeping.
He grew up to study philosophy and then law, but spent most of his time watching Red Dwarf, Alien(s) and Battle Star Galactica instead.He currently lives in the beautiful North West of England with his wife and two children.By day he teaches philosophy ("there are MANY right answers!") and law ("there is ONE right answer, and it's this!"). By night he writes about imaginary worlds filled with characters who are far more interesting than he is.
Gem Jackson author photo - download here

Interview with Nicobellfiction can be found here.

Anton Biarritz, a ruthless career terrorist, masterminds a devastating attack on Earth and makes his escape aboard the warship Aggressive. Posing as a misanthropic diplomat, he must preserve his identity and reach the edge of the Solar System to fulfil his dark task.

September Long is a brilliant, but disgraced, intelligence officer determined to bring Anton to justice, whatever the cost. As the stakes rise, she finds herself isolated and caught in a deadly battle of wits in the cold, emptiness of the outer planets.

Thrown into the middle is Leon Wood, a young pilot officer on board the Aggressive, seeking to escape his past growing up under an oppressive regime on Titan. As Titan breaks ties with the ruling powers on Earth, Leon finds himself trapped between forces far greater than he ever imagined possible.

THE AGGRESSIVE plays out across a Solar System dominated by power struggles and commercial interests. Moving outward from Earth, the trio must navigate gangsters, pirates and the worst of humanity as they approach their journeys end around Saturn. 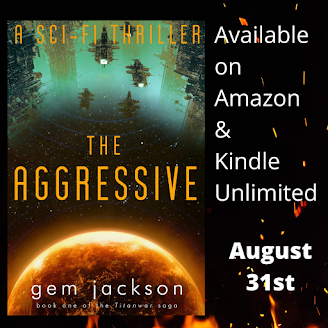