Residual Belligerence is the first book in C.G.Hatton's Thieves Guild series. In many ways it is difficult to categories encompassing as it does elements of thriller, space opera and military sci-fi.

In the book we are introduced to Zach Hilyard, contract thief extraordinaire. We meet Hil, as he's known, at perhaps his lowest ebb having crashed his spaceship on an unknown world, without the package he was contracted to retrieve or any memory of how he got into that position. What follows is a fast paced thrill ride as Hil attempts to piece together the events before the crash, retrieve the package and evade the various powerful forces colliding around him, all intent on bringing his world crashing down around him. The book is ambitious in scope, populated with a large cast of characters and locations from one side of the galaxy to the other.

I said above that the book is fast paced and I really mean it - this book does not let up. The narrative covers a huge amount of ground across its seventy thousand or so words. Each chapter sees Hil shooting off to new worlds, spaceships and locations with the consequence that you definitely won't be bored. The start of each chapter is always devoted to an ongoing conversation with the head of the Thieves' Guild and his mysterious overlord and in this we get our only real subplot. Everything else is focused entirely on pushing the main story forward. I know for a lot of readers this is exactly what they will be after and if story pace is high on your list of demands in a book, rest assured, you won't be disappointed here.

For myself, however, it's a little too fast and I found it impacted on characterisation a little. As stated above, there is a large cast of characters across the book, though very few of them feel fully fleshed out. Even Hil himself I found to be a little thinly developed. Every so often I noted the book telling me one thing about him where his actions indicated something else, for instance that being patient was second nature to him, just after he acts impulsively. Early on we're told he's not a fighter, that's why his ship is unarmed, yet he spends a good amount of the book slugging it out with various opponents. We're told emphatically and repeatedly that he's pretty great at everything and a darn nice guy to boot and, frankly, I just don't buy it.

However, it could be argued that I'm being a bit harsh there – we’re meeting Hil at the start of a six book series, and a popular one at that, which suggests Hil is a strong enough character to sustain a half a million words of storyline. Plus, I’m also of the same view about Aragorn and he seems to have done all right.

What Hatton has absolutely nailed, however, is the creation of a complex, living universe. There is a history, hinted at but not explored, of two great powers; Earth and Winter. The Thieves Guild is caught in the middle and is the focus of the story, but you’re left in no doubt whatsoever that Hatton has a broad and deep understanding of the world she has created. From civil wars on fringe planets, to galactic plots and private commercial power-struggles, Residual Belligerence will likely leave you wondering about all the other places and stories we don’t get to read about in this book. I guess that’s why you would buy book two though, right?

There were a few elements that I particularly enjoyed, for instance the way artificial intelligence is dealt with. Hatton gives each ship their own personality and manages to do so in a way that adds meaningfully to the plot, rather than just riffing on a traditional sci-fi trope. Again, I suspect the groundwork is being laid for a more detailed exploration of these concepts later in the series, where complexity will build upon complexity. 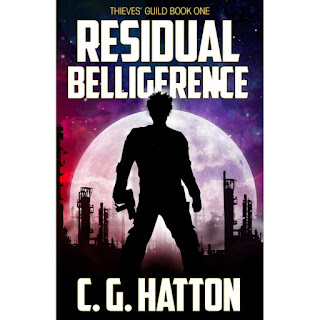 So, when would I recommend this book? To my mind it’s perfect for when you want an intravenous shot of adrenaline-fuelled sci-fi thriller straight into your mind box. For context, I’m writing this at about the time that the Witcher has just been released on Netflix. I don’t watch the Witcher for slow-burning meditations on existence. I want my hit of fantasy action adventure and I want it now. Residual Belligerence fulfils the same role sci-fi adventure. Sure, I can quibble about some bits around the edges, but in the thrill of chase, at the cliff-hanger ending of another chapter, am I going to keep reading? Yes I am. Will you? Yes, yes you will. So sit back, stick a baffle over your implant so you won’t be disturbed and enjoy the ride.