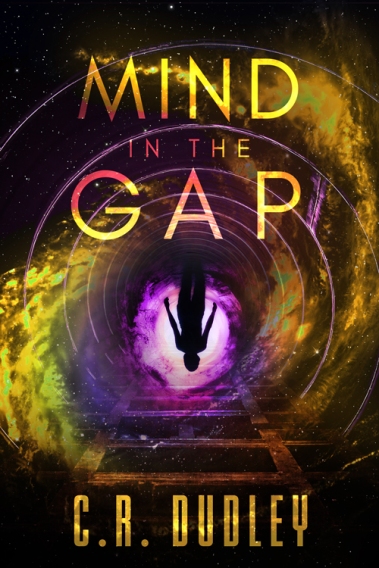 Through Mind in the Gap author C.R. Dudley offers to take you on a mind-altering journey across the expanse of time, space and consciousness. Across thirteen self-contained short stories, with thirteen short intermission pieces between them, we are offered a fragmentary glimpse of many possible worlds and realities. In one sense this is a collection of sci-fi and speculative short fiction; we are presented with robots, bioengineering, glimpses of possible futures, dystopian landscapes and climate collapse. Yet these stories share a deep interconnection. This isn't an arbitrary collection of the authors writings - it is a singular piece of work, whole and self-contained.
First, a caveat. I hugely enjoyed reading Mind in the Gap, not just once, but repeatedly (I'll discuss why further down). 'But then again,' some of my friends might say, 'you would!' By which, they would mean that I'm fascinated by philosophy, religion alongside various other esoteric subjects and Mind in the Gap falls precisely within the scope of those interests. This is a book for those who enjoy having their brains teased. It is not a book to read if you're after a straightforward, superficial adventure. That's not a criticism, either of Mind in the Gap nor of straightforward adventure books. However, if the idea of something like The Matrix with all of the mind-bending but none of the guns, kung-fu or tight leather pants strikes you as horrifying, this might not be for you.

There is no getting away from the fact that this is a conceptual book. Given that the stories range between two and five thousand words (nb - my estimate only) there is necessarily limited scope for characterization. Nevertheless Dudley introduces each set of characters with skill befitting the brevity of the short-story art form. We get a feel for ZXXX84 (Yes, that is their name) or Uncle Billy quickly and effectively. Despite the disparate world and feel of each story, as a reader I never felt particularly lost. And you will discover new worlds. There are spectacular imaginative leaps throughout the book. Dudley is a meticulous builder of worlds, both the familiar and the innovative. There are wonderful connections found between the leftfield and the mundane. Familiar features of everyday life, such as trains and subways, are collided with the unusual and unexpected to terrific effect.

I took particular pleasure in the books depiction of northern England. As a northerner myself, albeit of a Red Rose pursuasion, I found the descriptions of railway stations, car parks and towns to bear a comforting familiarity. Whilst this is obviously of limited relevance to most readers, given the global nature of todays world, they can be confident that Dudley is getting this stuff right. The picture is painted well.

The thematic choices of the collection are rich and varied. It's tempting to pick out consciousness as the overarching thread of Mind in the Gap, but that somehow seems too simplistic. In another way it could be argued that the key theme is precisely the lack or negation of consciousness. Across the many stories told Dudley touches upon souls, reincarnation (or should that be rebirth?), the emergence and annihilation of the ego, reality, illusion and deception. If you need a moment where everything comes together, you're likely to be disappointed. There is no big reveal, or twist as you might find in a mystery novel. Instead, the stories in Mind in the Gap are there to be savoured and rolled around the mind like a rich red wine. The truths they contain sit at the periphery of consciousness, becoming richer as they are left shimmering just out of focus, becoming more elusive if they are grasped more deliberately.

Which brings me back to why I enjoyed reading the book more than once. In order to see the parts clearly, one must see the whole. Who is Zane? Carla Jenkins or Uncle Billy? What is with the purple eyes? The bright dome? The inky, black spheres? A second or third reading will give a deeper understanding of the interconnectedness of the stories and characters within them. All I will say beyond this is if the stories grip you, it's likely you will find yourself flipping back and forth between them before long. There are many layers to the book and lots of well placed 'Easter eggs'. Are they all intentional? I don't know - I found some lovely alignments between train times and passages from Revelation, but then this didn't work all of the time. Does that matter? I don't think so. It seems entirely fitting with the spirit of the book that we see a part of ourselves reflected back at us in the words and images presented.

In conclusion, when would I recommend Mind in the Gap? Well that depends. Is philosophical fiction your thing? Do you enjoy Kurt Vonnegut or Philip K. Dick? Then I would absolutely, one hundred percent recommend. However, the short story format means it may also be an excellent choice for someone looking to move beyond a linear plotted narrative - maybe you're after something speculative that will challenge you and make you think? Maybe you just want something different to the norm, something that isn't afraid to take on not one, but a whole cluster of big ideas all at once? There's just one thing I'd ask, however - if you do pick it up, let me know what you think is going on with those purple eyes...
Mind in the Gap is available in print and Kindle formats.
Mind in the Gap https://www.amazon.co.uk/dp/1999868420/ref=cm_sw_r_cp_apa_i_XhIgEbASSYZRY