E.M. Sky-Hook's The Fated Sky is a hybrid fantasy space opera, which introduces us to the world of Temsevar and the universe of the galactic Coalition. It is the first book of the Transgressor trilogy and was published independently in 2016.

Probably the best insight I can give you into the book comes from relaying my experience of reading the first chapter. Picture the scene - I'm away on a work trip, escorting some high school students to a conference. They are busy getting into their project and I'm left with time to kill. I start a couple of books but, frankly, I'm not feeling them. Twitter leads me to The Fated Sky. The preview reads well, so I download and get stuck into chapter one. Then it happens - beautiful, fluid descriptions of an alien landscape. Dialogue floats off the page, engaging and unforced. It's the kind of prose that puts you at ease; trust me it says, I know what I'm doing, you're in good hands.

The plot centres on a group of individuals who's lives intertwine across the continents of Temsevar, a primitive, medieval-like world. A space ship has crashed in the desert and amongst the valuable, tech-strewn ruins lies a survivor - Avilon Revid. Picked up by an ambitious caravansi trader, Avilon finds his fate tied to a shifting cast of characters; a baby butchering general, a proud warrior captain and a mischievous seller of truths and deceit. Each finds themselves needing Avilon to achieve their own end, whilst he simply wants to find a way off a world that doesn't want to see him leave.

The characterization in The Fated Sky is first class. Each character is fully and roundly developed. I enjoyed getting to know them and was pleasantly surprised to find my own attitude towards them shift and change as they forged their own paths through the narrative. Whilst I found Avilon to be perhaps the thinnest of the characters (a victim of the perennial 'space commando, good at everything, smart handsome and all round lovely guy' syndrome), the others have been a joy to encounter. Who would have thought I would end up rooting for the undeniably irritating, when we first meet him at least, Durban Chola?

I undestand that pace is primary for many, however, science fiction and fantasy are genres that reward giving the reader time and space to undestand the places they are visiting. E.M. Swift-Hook's prose beatifully balances the requirements of pace against the pleasure and escapism of exploring new worlds. It is a confident book and rightly so. I didn't race through to the end - I didn't want it to end. Plus, at near four hundred pages there's a lot of book to get lost in. Having said that, when the end did come it was satisfying. There are more books in the series and I look forward to revisiting Temsevar in the future. 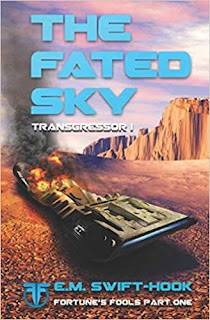 There are a few interesting elements to the book that are worth noting. For a start it's worth noting that despite the spaceship on the cover this is more of a fantasy story than science fiction. It's a bold move and it works. More than once I was put in mind of Dune, at least the sections where Paul Atreides is among the Fremen. On top of this there are intruiging, if short lived, explorations of gender roles and power relationships as we follow Alexa struggle to be recognised amongst her male peers.

In summary, The Fated Sky is an impressive and engaging fantasy sci-fi that stands out as a great example of what independent authors are producing. I would recommend this to anyone who enjoys richly constructed, intelligently built worlds with a damn good story running through them. Reading The Fated Sky took me back to my youth reading David Lee Eddings, Raymond E. Feist and other fantasy greats. If that's your bag, you're in safe hands.

The Fated Sky on Amazon